ATLANTA (AP) The Baltimore defense made life miserable for Matt Ryan and the Falcons' offense - and gave rookie quarterback Lamar Jackson plenty of room for error.

The Ravens turned in a dominating defensive performance, limiting Atlanta to its fewest yards in almost two decades while Jackson guided Baltimore to its third straight victory, 26-16 on Sunday.

The 2016 Heisman Trophy winner, making his third straight start and first on the road, completed only 12 of 21 passes for 125 yards but did plenty of damage with his legs. He carried 17 times for 75 yards, including a 13-yard scoring run in the first quarter that turned out to be the Ravens' lone offensive touchdown.

Not much offense was needed.

Not the way the Ravens played on the other side of the line.

''Our defense, they're rolling,'' Jackson said.

The Ravens sacked Matt Ryan three times - one of which forced a fumble that Tavon Young returned 11 yards for a touchdown to seal the victory midway through the fourth quarter. Baltimore held a nearly 2-to-1 edge in time of possession (39:39-20:21) and limited the Falcons to 2 of 9 on third-down conversions.

When the Falcons went for it on fourth-and-1 at midfield, Ito Smith had barely taken the handoff when he was swarmed over by the Ravens for a 1-yard loss. Atlanta finished with just 34 yards rushing on 15 carries.

''The defensive line did a great job of containing the run,'' linebacker C.J. Mosley said. ''Once a defense gets a team one-dimensional, that's when you can definitely go to work on their offense.''

For Ryan, it was the fewest passing yards in a game he played from start to finish in his 11-year career. The only times he threw for fewer yards were in 2009, when he passed for 15 yards against Tampa Bay before being knocked out of the game with a toe injury , and a 106-yard performance in the 2011 regular-season finale, also against the Buccaneers, when the Falcons built a big lead and rested their starters heading into the playoffs.

''We never really got anything going,'' Ryan said. ''That makes it tough when you really are not moving it and you're letting them kind of dictate the game. That's a tough pill to swallow.''

The Ravens (7-5) have bolstered their AFC wild-card position since Jackson took over at quarterback for the injured Joe Flacco. The rookie had some shaky moments - and left for one series to be checked for a possible concussion after getting hit in a head by a teammate - but he was good enough to send the Falcons (4-8) to their fourth straight loss.

''I wanted to get back out on the field and help my team win,'' Jackson said.

The Falcons, mired in their longest losing streak since a six-game skid in 2015, played before thousands of empty seats at Mercedes-Benz Stadium and heard plenty of boos with the clock winding down.

''This is as challenged as we've been in a while, certainly since I've been here,'' said Dan Quinn, in his fourth season as the Falcons coach.

The only excitement was provided by defensive end Vic Beasley, who picked up a fumble after Grady Jackson knocked the ball loose from Jackson. Beasley took off on a 74-yard return , huffing and puffing toward the end but finding enough energy to spike the ball over the goalposts, giving the Falcons a short-lived 10-7 lead. The Ravens tied it up before halftime and dominated the final two quarters, outgaining Atlanta 193-44.

The Falcons finally scored their lone offensive touchdown on Ryan's 1-yard touchdown pass to Austin Hooper with 4:18 remaining, getting a big assist from a pass interference penalty.

Baltimore continued to get good production out of rookie running back Gus Edwards, who followed up two straight 100-yard performances by grinding out 82 yards on 21 carries.

Edwards is an undrafted player out of Rutgers who spent the first five games on Baltimore's practice squad.

An injury to Alex Collins, whose season ended Saturday when he was put on the reserve list, opened the door for the 238-pound Edwards. He's sure taken advantage of his opportunity.

Ravens: Jackson missed one series in the third quarter, clearing the way for Robert Griffin III to get his first significant playing time since 2016. Griffin went 2 of 4 for 21 yards, guiding the Ravens to a field goal before Jackson returned to the field. Also, G Alex Lewis left with a shoulder injury.

Falcons: TE Logan Paulsen went out in the second quarter with a knee injury. LB Foyesade Oluokun (knee) left briefly but was able to return.

Falcons: Travel to Green Bay to face the slumping Packers, knowing they must win their final four games just to avoid their first losing season since 2014. 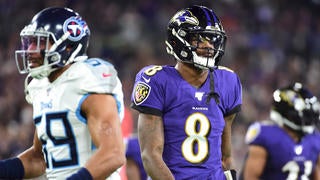