CINCINNATI (AP) Ben Roethlisberger saw the defensive alignment and knew immediately that the Pittsburgh Steelers had a chance for a winning touchdown. All he had to do was get the ball to Antonio Brown right away.

Brown took a few strides, caught the pass and ran behind Justin Hunter's block for a 31-yard touchdown with 10 seconds left Sunday and yet another improbable - and entirely predictable - victory over the Cincinnati Bengals. The Steelers' 28-21 win made it eight straight and counting over their AFC North rival.

''We've been in that situation a lot, and I knew we were going to do it,'' Brown said.

James Conner ran for 111 yards and a pair of touchdowns on the eve of Le'Veon Bell's possible return to help the Steelers (3-2-1) get ahead, but they had to pull off their third last-minute rally at Paul Brown Stadium to extend the streak.

Joe Mixon's 4-yard touchdown run with 1:18 got the Bengals (4-2) thinking they might finally have their breakthrough. Roethlisberger and the Steelers stunned them again.

Big Ben came to the line on the decisive play and saw that the Bengals were set for an all-out blitz with no safeties to guard against a big play. He immediately thought touchdown.

''When you see that look, it's how fast can I get him the ball,'' said Roethlisberger, who is 14-2 in his career at Paul Brown Stadium.

Brown caught the ball in stride, cut Hunter's block and outran the secondary for the winning score, leaving thousands of Steelers fans twirling their towels in the stands while stunned Bengals fans stood and watched a familiar ending.

The Bengals are 2-16 against the Steelers at Paul Brown Stadium during coach Marvin Lewis' 16 seasons, including a pair of playoff losses.

''Imagine how we feel,'' Bengals cornerback Dre Kirkpatrick said. ''I imagine how the fans feel.''

These Ohio River rivalry games are usually nasty, and this one had its moments. After Andy Dalton's final pass fell complete, several players got into a scuffle in front of the Cincinnati sideline.

After a sloppy September, the Steelers have won two in a row and found their stride behind Conner , who became the featured back when Bell decided to hold out. Conner has run for more than 100 yards in each of the last two games, and his pair of 1-yard touchdown runs Sunday put him in the company of a pair of Steelers Hall of Famers.

Conner has seven rushing touchdowns in six games, joining Franco Harris (1976) and Jerome Bettis (2004) as the only Steelers with that accomplishment.

''James was a bowling ball today,'' said Roethlisberger, who joked that it was probably the running back's final game amid reports that Bell would return.

JuJu Smith-Schuster had a spectacular catch - leaping over cornerback Darqueze Dennard and taking the ball way - that set up Conner's second touchdown.

Bengals receiver Tyler Boyd had a solid game against his hometown team, catching touchdowns of 2 and 14 yards .

Cincinnati linebacker Vontaze Burfict was in the middle of several dustups. He had words with Roethlisberger only 3 minutes into the game. He stepped over Conner on the running back's first touchdown, prompting a teammate to push him away before the situation could escalate.

Burfict also hit Brown in the head - he wasn't penalized - after a catch, causing the receiver to leave for a couple of plays. In 2015, Burfict's hit to Brown's head helped the Steelers rally for an 18-16 playoff win. On Sunday, Burfict yelled at a reporter in the locker room after the game for asking a teammate about the latest hit on Brown's head.

Steelers linebacker Ryan Shazier returned to the stadium where he suffered a spinal injury last December. He's been on the sideline for games this season. His return to Paul Brown Stadium was emotional for all the Steelers.

''He's inspired us,'' coach Mike Tomlin said. ''Hopefully he's inspired many outside of us.''

Dalton finished 26 of 42 for 229 yards, moving ahead of Boomer Esiason for second on the Bengals' career passing list behind Ken Anderson. Dalton fell to 3-12 against the Steelers.

Bengals: RB Giovani Bernard missed a second straight game with a knee injury. LB Nick Vigil left with an injured left knee in the first quarter. Dennard hurt his right shoulder on Smith-Schuster's catch and didn't return. S Shawn Williams left in the second half with a concussion.

Steelers: Have their bye week. 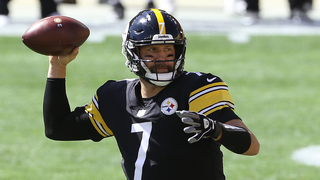