MINNEAPOLIS (AP) The Minnesota Vikings played a back-to-the-basics game, leaning on Latavius Murray's powerful legs and a smothering defense that was in prime form.

The Arizona Cardinals just couldn't keep up on either front.

Murray helped the Vikings revive their running attack with a career-high 155 yards and a touchdown on 24 carries, wearing down the Cardinals on the way to a 27-17 win on Sunday.

''I don't want to sit here and say that we cracked the code, because they have been vulnerable to the run game, so we have to be honest about that on all levels,'' Murray said. ''But I will say I feel we're capable of running the ball that way, no matter who we're playing.''

Starting in place of Dalvin Cook (hamstring) for the third time in the past four games, Murray had 66 yards by halftime to top the team average over the first five games. The previous long gain by a Vikings running back was Cook's 15-yarder in the season opener, which Murray topped four times against a Cardinals defense that entered the game allowing the second-most rushing yards in the league.

''If you allow teams to rush for almost 200 yards on you, you're not going to win that game. It is what it is,'' defensive tackle Corey Peters said. ''That's kind of been our thing all year, and that's why we're 1-5.''

Even Kirk Cousins joined the fun for the Vikings (3-2-1) with an option-style run across the goal line in the third quarter, before throwing to Adam Thielen for a score on the following possession. The Vikings celebrated their touchdowns with a choreographed a clumsy "dead-arm" dance that Thielen recalled from college.

Thielen had 11 receptions for 123 yards, his sixth straight 100-yard game to become the first player in the NFL since 1961 to start a season with a streak that long. Thielen's 58 catches are the most in league history through six games.

Budda Baker returned a fumble off a sack by Chandler Jones for a 36-yard touchdown and Tre Boston had a diving interception later in the second quarter, and the Cardinals (1-5) constantly pressured Cousins with four sacks, seven hits and seven deflected passes. He leads league with five lost fumbles.

Cousins still managed to complete 24 of 34 attempts for 233 yards, thanks mostly to Thielen and his exceptional ability to get open anywhere on the field and turn off-target throws into clutch catches. He made a toe-dragging sideline grab on third-and-13 right at the first-down marker to extend the opening possession of the third quarter, before capping the drive in the end zone with a 13-yard reception on a seam route after leaving linebacker Josh Bynes in his wake with a stutter step.

The tone was set in the first quarter on Murray's 21-yard touchdown run , when he flattened Antoine Bethea with a stiff arm.

''It's not a game to invite Chandler Jones to come wreck it and get them right back in the game, so we were trying to run the ball,'' Cousins said.

Coming off his first career NFL victory last week, Rosen went 21 for 31 for 240 yards. The Cardinals failed to move the chains on all 12 of their third or fourth down plays. That included a third-quarter interception by Anthony Harris and a fourth-and-goal stop of David Johnson by Xavier Rhodes at the 1 in the second quarter.

''He can learn from this, being in this hostile environment,'' Cardinals coach Steve Wilks said. ''This is how the NFL is. He's got to be able to operate under these kinds of pressures, and everybody around him needs to help him out.''

Larry Fitzgerald, the intended target when Harris jumped his route, had five catches for 39 yards in his hometown. The 15th-year veteran fell to 0-6 in career visits to Minnesota, where the Cardinals have lost 10 straight games since they were in St. Louis in 1977.

The Vikings missed injured left tackle Riley Reiff (foot), with Jones often overpowering Rashod Hill, who switched sides as rookie Brian O'Neill made his first start at right tackle. Jones had 1 1/2 sacks, and Benson Mayowa had two deflected passes from the other defensive end spot while rotating with Golden.

Johnson had a late touchdown run and 55 yards on 18 attempts, but he lost a fumble in the first quarter. ... Danielle Hunter had two of Minnesota's four sacks, giving him at least one in each of the first six games for the third-longest streak in team history.

Cardinals: LG Mike Iupati (back) was replaced in the third quarter by Jeremy Vujnovich (hamstring), who left in the fourth quarter. RG Justin Pugh (hand) also went out, forcing John Wetzel and Daniel Munyer to man the guard spots.

Vikings: CB Mike Hughes limped off in the fourth quarter with a left knee injury, and he was on crutches afterward. Coach Mike Zimmer said Hughes would have an MRI on Monday. ... With strong safety Andrew Sendejo (groin) inactive, George Iloka got his first start. Harris frequently rotated in, too.

Vikings: Play on the road against the New York Jets next Sunday. 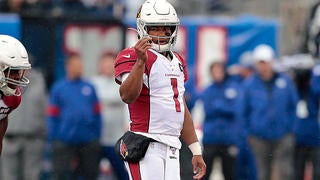